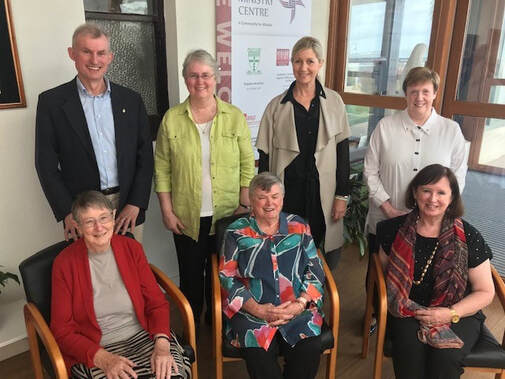 From L - R
Back Row:  Denis Fitzgerald, Maree Marsh csb, Catherine Jackson, Anne Astin
Front Row: Brigid Arthur csb, Rosemary Copeland (Co-Chair);  Kathy McEvoy (Co-Chair)
​​Rosemary Copeland, Co-Chair
Rosemary Copeland was appointed to the Trustees of Kildare Ministries in 2014. She graduated with a Teachers Certificate, a Bachelor of Arts from the University of Queensland and has a Graduate certificate in Religious Education and a Certificate in Education Law. Rosemary has worked in Catholic Education in Victoria for over 30 years, 9 of which were as Co-Principal of St Joseph’s in Echuca. Following principalship, Rosemary took up a position as an Education consultant with Sale CEO, particularly being involved in supporting Principals and the selection and performance review of executive staff as well as the development of school reviews and strategic planning.  She is the Kildare Ministries representative on the Council of the Association of Ministerial PJPs. Rosemary is the Trustee representative on the TKM Mission and Ministry subcommittee, Governance subcommittee and the Finance subcommittee.

Kathy McEvoy, Co-Chair
Kathy McEvoy was appointed as Trustee for Kildare Ministries in 2014. Kathy graduated from Queen’s University, Belfast with a Bachelor of Education (Hons) and undertook further studies in Educational Leadership at the Australian Catholic University and in Theology at Flinders University, Adelaide, receiving Masters degrees in both. Kathy has been a leader in the Catholic Church, serving as Principal of Kildare College, Adelaide; in the Adelaide Archdiocese as lay member on the Diocesan Pastoral Team with Archbishop Leonard Faulkner and Chancellor for Mission with Archbishop Philip Wilson; and later serving as Director of Catholic Education in the Diocese of Port Pirie. Currently, she is an Executive Member of the South Australian Council of Churches and a member of the Ecumenical Partners for Justice and Peace Standing Committee of the Council. She is a member of the Uniting Church and Roman Catholic Church Dialogue in South Australia; serves on advisory groups in leadership of two Catholic parishes and helps plan and lead an annual Study Tour to the Bible Lands.
Kathy is the Trustee representative on the TKM Mission and Ministry subcommittee.

Maree Marsh csb
Maree Marsh was appointed to the Trustees of Kildare Ministries as inaugural Co-Chair in November 2013 and is presently the Leader of the NSW Brigidine Sisters. Maree joined the Brigidine Sisters in 1971 and began her professional life as a secondary school teacher.  In 1990 Maree joined the community of Australian Catholic University working in Student Support Services for seventeen years. Maree received her Master of Psychology from Macquarie University; her Master of Theology from Boston College and her Doctorate in Ministry from Boston University. Maree was Congregational Leader of the Brigidine Sisters from 2007 - 2011 and since that time has been involved in other areas of ministry including:  Member of the Truth Justice and Healing Council; Member of Australian Catholic Religious Against Trafficking in Humans and involvement in various social justice groups. Through her work as a psychologist Maree was awarded the Anti-Slavery Australia Freedom Award in 2015, recognising her commitment to supporting men and women trafficked into Australia. Maree is the Trustee representative on the TKM Finance subcommittee.

Brigid Arthur csb
Brigid Arthur was one of the first group of Trustees who were appointed to Kildare Ministries in 2014. She grew up in the Wimmera rural community of Kaniva, and was educated at St Brigid’s College, Horsham. After she joined the Congregation of Sisters of Brigid, she began her long and passionate career as an educator in Brigidine Colleges throughout Victoria. Brigid has degrees in Arts, Education, Mathematics, Science and Religious Education from several Australian universities and Fordham University in New York.  Brigid worked as a consultant with Catholic schools in the Sale diocese.  She was the first executive officer of the Brigidine Secondary Schools Council (BSSC) and in this capacity worked on the future planning of the schools which led to the establishment of Kildare Ministries.
In 2001, Brigid began advocating for the increasing needs of asylum seekers and refugees in our society.  Together with Catherine Kelly csb, she began the Brigidine Asylum Seekers Project (BASP).  Brigid has been described as ‘an octogenarian human rights advocate, protester and leader.’ In 2019, Brigid was honoured as a Life Member of Catholic Social Services Victoria in recognition of her many years of dedicated and unrelenting work for Asylum Seekers and refugees. Brigid is the Trustee representative for the TKM Mission and Ministry subcommittee.

Anne Astin
Anne Astin was appointed as Trustee of Kildare Ministries in January 2017 following her six and half year stint as Board Chair Wellsprings for Women.  She is currently Board Chair of Good Shepherd Australia New Zealand. Anne has a demonstrated history of working in the public health, agriculture and food sectors from a government policy and regulatory perspective.  Anne is skilled in collaboration, stakeholder and industry engagement and consultation.  She is a Member in the General Division of the Order of Australia; a recipient of a Public Service Medal; has received the John Bryant Gold Medal, an Australian Dairy Council Outstanding Service Award and is an inductee of the Victorian Women's Honour Roll. Anne is a mentor to women as leaders in their Church communities and is a Councilor for Catholic Social Services Victoria. She is the Trustee representative on the TKM Governance subcommittee.

Denis Fitzgerald
Denis Fitzgerald was appointed as Trustee for Kildare Ministries in January 2020. Denis has qualifications in Arts, Business, Public Policy and Theology. For the past 12 years Denis served as the Executive Director of Catholic Social Services Victoria. Before that, he held several policy and management positions in the Victorian Government, and served in various diplomatic roles, including as Australian Commissioner to Nauru.  Denis is the Trustee representative for the TKM Governance subcommittee.

Catherine Jackson
Catherine Jackson was appointed as Trustee for Kildare Ministries in January 2020.  She established her consultancy business, focusing on Leadership Development and Executive Coaching in 2017 after serving as Director for School Services, Brisbane Catholic Education. In addition to several senior roles at system level, Catherine’s career has included time as an Educational Consultant in New York City schools, as well as Principal at St Finbar’s Catholic Catholic School, Sydney. She received her Bachelor of Education from the University of Southern Queensland and a Master of Education from Central Queensland University. Catherine has also completed post-graduate studies at the Australian Catholic University and Boston College. Her passion is developing the next generation of leaders with a strong moral purpose and a commitment to their organisation, clients and Australian society. Catherine’s current work spans leadership succession and development, emotional intelligence, building high performing leadership teams, instructional coaching, leaders’ health and wellbeing and executive coaching. Catherine is the Trustee representative for the TKM Mission and Ministry subcommittee.
© 2021 Kildare Ministries